Performance testing in production? Here are 14 grid management best practices you should know

I spent a few days in New York City last week attending a couple of meetups, including speaking at a New York City Web Performance Meetup on Thursday night. I had several great conversations around real user monitoring, data science and analytics, and, of course, testing in production (my favorite topic these days!).

I had quite a few discussions around how SOASTA CloudTest manages these large cloud environments and if there are any best practices for load server grid management, especially when performance testing using a very large, location-diverse -- and even cloud provider-diverse -- environment.

Well, of course there are! So what better time to write a blog post about grid management best practices when you've just spent a few days in one of the best city grids in the world -- New York!

Overview of the CloudTest environment

CloudTest's load server is implemented as a massively multi-threaded service executing all, or parts of, a complex test composition. (Note: A composition can contain many clips.)

A single node can send and validate responses to thousands of HTTP messages per second. Multiple Maestros can be combined to each execute parts of a large load test. Maestros can be geographically distributed and single test compositions can run geographically distributed while still producing a single integrated set of test results and analytics.

That said, once you have created the tests you want to run, CloudTest lets you select and deploy load generators using internal, public and private cloud resources. For example, you can choose resources from Azure, Amazon EC2 or GoGrid cloud services. CloudTest takes care of deploying and provisioning the load generators, benchmarking the virtual servers for their health, and monitoring the CPU of the load generators while they are running. You can literally deploy a test cloud using hundreds of thousands of virtual users around the globe in minutes. And because you are using cloud resources, you pay only for the resources used during the test.

A CloudTest environment typically contains, at a minimum, a "Main Instance" (server) that contains the web application and a "Maestro" service (load generator). For higher-volume situations, there may be a separate database server that contains the Repository and the Results Service with its Result database.

Optionally, there may be additional servers that contain additional Maestros (load generators) and additional Results Services.

This general structure applies, regardless of whether physical servers are being used or a cloud-based environment is being used, or a combination of the two.

In our example in this blog post, let's target a cloud-based environment for a high-volume situation.

So let's get started: Best practices for grid management with SOASTA CloudTest!

Load servers are usually automatically managed by CloudTest. The CloudTest user is only expected to deploy and tear down the grid. But there may be corner cases where grid deployment is not successful; in those cases, the grid may not finish deployment or all listed servers may not be functioning properly.

This blog post provides best practices that should be employed to ensure grids are working, as well as provide troubleshooting steps for cases they are not.

Important: Make sure you have all the required servers available before loading a composition.

1. Ensure that the server list is correct before starting, and that there are no servers from previous deployments.

Most often this will not be an issue unless you manually added servers, or a grid has been left up from a previous run. Disabling the servers rather than removing them is sufficient if you wish to retain them in the server list, but typically you'll remove any old servers.

In the server list above, there are a number of servers that have been launched as a grid and others that were manually launched and then added to the server list. You can select one or more of the servers and Check Server(s) from the right-click context menu to validate that they are enabled and verified. You may want to leave manually created servers in the server list, even if you're not using them, so you don't have to re-add them later. In order to get a valid server list you must uncheck 'Enabled' on the 'Services' tab for any unused servers.

There are a number of other actions you can take on server, as shown above.

2. Under normal circumstances, grid deployment will complete and the green checkmark on the CloudTest UI will be displayed. 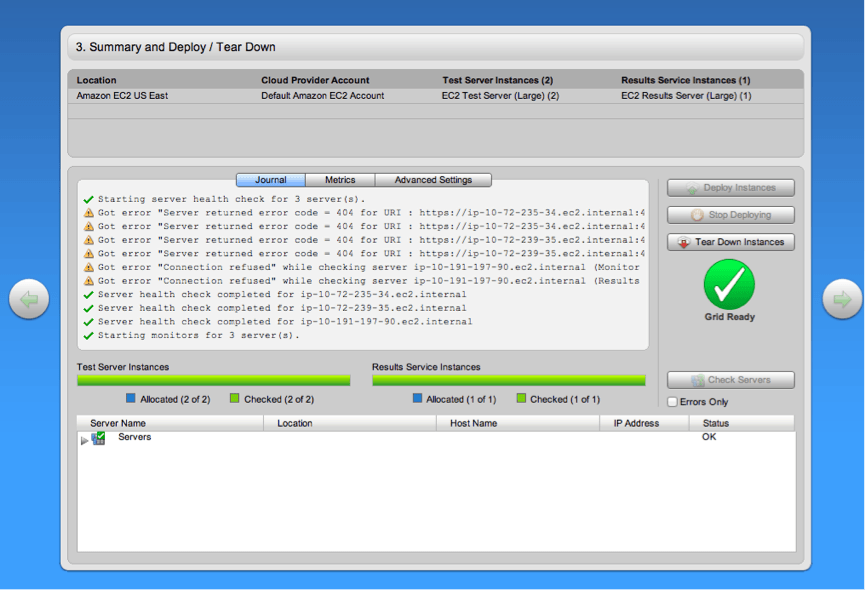 3. When launching grids, it is best to start with the slowest grids first.

Of the available providers, GoGrid will generally take the longest to launch taking more than 30 minutes in some cases. Azure, Rackspace and HP are all about the same and will take anywhere from about 7-8 minutes to 30 minutes, usually depending on the size of the grid and number of locations. AWS generally launches in 3 or 4 minutes, but could take longer if it's a grid in the hundreds or thousands of servers.

4. You can launch multiple grids at once, but that is not usually recommended.

When launching multiple grids, you should keep the tabs open for grids that have not finished deploying and should only do so for different providers. You may also see more warnings (such as Server Mismatch) in the server list until all grids have finished deploying if you have multiple grids launching at the same time. While not required, it is easier to troubleshoot (and recover from) issues if you include only a single provider when you launch a grid. You can launch multiple locations for a single provider simultaneously.

5. For GoGrid it's better to launch multiple smaller grids than one big grid.

6. If a grid is taking a long time to come up (only one or two servers are left, getting extended timeouts) choose 'Proceed with X of X' and supplement with another grid for any additional required servers.

Choosing proceed without stopping allocation will force the grid to begin checking and verifying servers. Again, if you already got a Results Server (or more if you have more than 50 LGs) in that location, you don't need to add another.

Please make sure NOT TO CLICK 'Stop Deploying' before clicking the proceed button, you will be prompted after clicking whether or not the grid deployment should be stopped. Also, if you do this you will see the Grid Ready green check but the grid manager progress bars will not fill completely up. You should be able to all of the servers that were deployed prior to clicking the Proceed button. See below for checking servers.

7. Even after receiving green checkmark for grid deployment, it is good practice to run check servers from servers tab on left panel of CloudTest and make sure the status for all servers is OK. 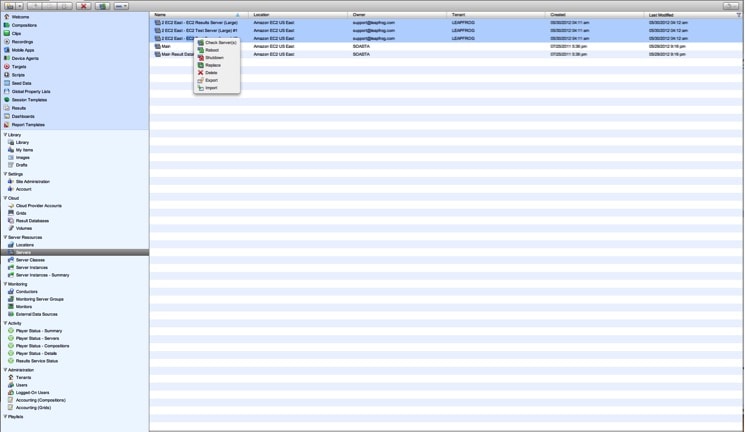 8. If you 'Stop Deploying' for any reason in the grid manager, go to Servers tab on left panel of CloudTest and click 'Check Servers' for available list of servers.

In this particular case, we got 1 Result Server and 5 test servers from Rackspace. There is one invalid test server, which has been automatically disabled by CloudTest.

This can be done by clicking on the respective server under Servers tab and unchecking Enabled under the Services tab. You can also right-click on a server and reboot or terminate in place. Sometimes, rebooting a server will bring it back to life. 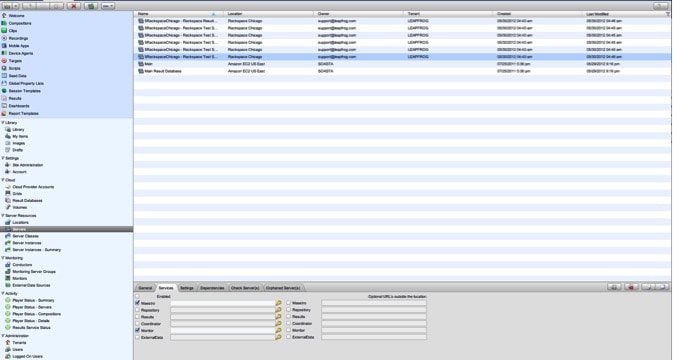 10. Once all the servers are up, it is good practice to run a smoke test with 1 virtual user on each load server in General mode.

This will confirm all servers are sending traffic as expected. You can use the actual test you are about to run by copying the comp and setting it to one user per server, but that is not necessary (and can be difficult if you have a complex composition). The test can be as simple as a single get to any public site or run in preview mode. This will test that all of the servers can be loaded and also that a Result can be created, exercising the Results Service structure (simply loading a Composition does not involve RS, so it does not test the RS infrastructure).

11. Always Load the Composition through the UI first and then press Play, as opposed to just pressing Play.

Loading the composition before pressing play typically allows you to identify and get past any loading errors, which is where bad grid servers may first show up.

12. Have the credentials for your cloud providers at hand.

See below. This is only needed if you experience any issues with grids that cause manual intervention as described above.

13. When terminating grids, if CloudTest displays an error the servers can be deleted from the cloud provider dashboard.

This will also require deleting servers in CloudTest under the Servers tab.

14. The servers can also be verified by accessing the console of relevant cloud provider.

So in this case, we are looking at Rackspace console displaying 5 servers in active status and 1 server still being built.

When driving load from a cloud-based environment, it is critical to deploy and tear down the grid and to follow the best practices outlined at a high-level in this post. In addition, this should be coupled with SOASTA's best practices for loading compositions into CloudTest in order to best optimize the load test operations. (Look for that blog post in early August! If you can't wait until then, join SOASTA's CloudLink community and search our Knowledge Base for these details.)