Who Is George Penguin?

One of the more challenging tasks as the new guy in Akamai's InfoSec department is getting to know George Penguin. He's our mascot and ambassador of good will. His likeness is everywhere in the office, most notably in the form of soft, stuffed toys that dominate the workspace like an invasion of the tribbles from "Star Trek."

I met George long before starting this job, and I admit that I've had a little fun at his expense. During the RSA conference in San Francisco last February, I acquired a stuffed George and stuck him in the side pocket of an unsuspecting colleague, who spent the night bouncing from one vendor party to the next with no clue that a penguin's head was bouncing up and down on the side of his leg.
As this department's storyteller, I can't do that sort of thing anymore. I have to play nice with George and keep him happy. Akamai CSO Andy Ellis absolutely adores George, and failing to get on the flightless waterfowl's good side could prove career limiting.
The first time I met George, he looked familiar. Duh, you're probably thinking. Everyone knows what a penguin looks like. But the fluffiness of this guy was something distinctive that stuck in my mind like a thorn. So I did some digging and remembered: I had run into his likeness dozens of times during family trips to the New England Aquarium. He was always in the gift shop, sold in stuffed animal form and in a smaller, rubber version. My youngest son Duncan had one of the latter. His name was Bucky, and he brought the child tremendous joy until he got old and worn out, at which point his rubber butt fell off.
It turns out one of the stuffed penguins was purchased by an Akamai employee during a team outing, and she was allowed to make the purchase as a business expense. That meant he had to be put to work.
And so Akamai's InfoSec emissary was born.
The little dude even has his own Twitter account (@SecurityPenguin), LinkedIn page.
Here's how he describes himself on LinkedIn:
"I am a highly motivated information security professional, looking to promote awareness of security practices. In my role as the Penguin of Awesome, I promote and recognize practices that promote and raise awareness of Information Security. I am assigned in 1-week rotations to shadow staff who have helped make Akamai a more Security-aware place to work, so that I may learn from them and make sure that their peers know how awesome they are."
He even has some LinkedIn recommendations. Akamai InfoSec CSIRT Director Michael Smith wrote, "GTP is hands-down the most awesome dictator that I have ever had the opportunity to work for. Just the other day I asked him 'George, I'm having a problem getting the sales reps to say no to customer audits, would it help if I showed up at meetings with a crowbar and threatened them physically?' He nibbled on his herring lunch and nodded. Such genius, such drive, such vision!"
There are pictures on the wall of team members with George. The photo op is something that comes your way in recognition of a job done well. My mug isn't up there yet, but it's something I covet.
Still, as popular as he is around here, there's something mysterious about George. There's a lot we don't know about him. There are rumors that he has a nemesis out there, someone dedicated to trouncing on the InfoSec principals we hold most dear.
I do have 20 years of reporting experience under my belt, and I intend to use those skills to peel back the layers of mystery.
Stay tuned. 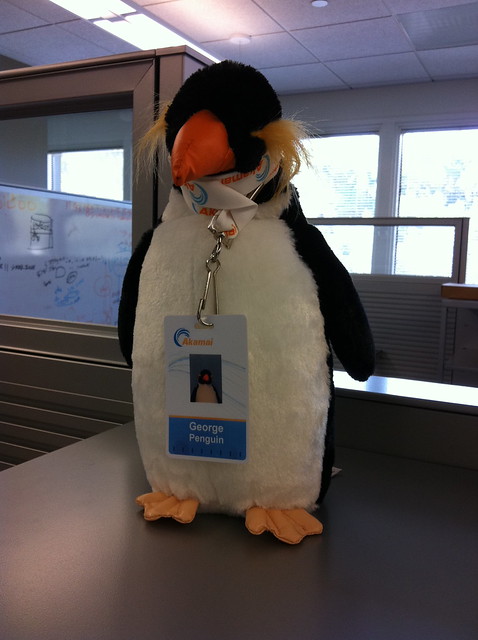